This one-day workshop focused on ‘religion’ as a changing category in modern Muslim practice.  Participants were invited to share case studies from their research as a basis for discussion of the possible insights to be gained by bringing critical approaches to the category ‘religion’ to bear on our study of Islam.

The aim of the meeting was to support and encourage such fledgling studies, sharing both methods and findings in order to identify: effective methodologies; a useful conceptual vocabulary; common patterns among diverse case studies; degrees of variation across contexts; and potential new avenues for research.

Sponsors:  This workshop was co-sponsored by the British Association for Islamic Studies (BRAIS) and Pembroke College, Oxford.  It was an initiative of the ‘Categories of Religion and the Secular in Islam’ Research Network, which aims to foster new research at the intersection of critical theory in Religion and Islamic Studies. 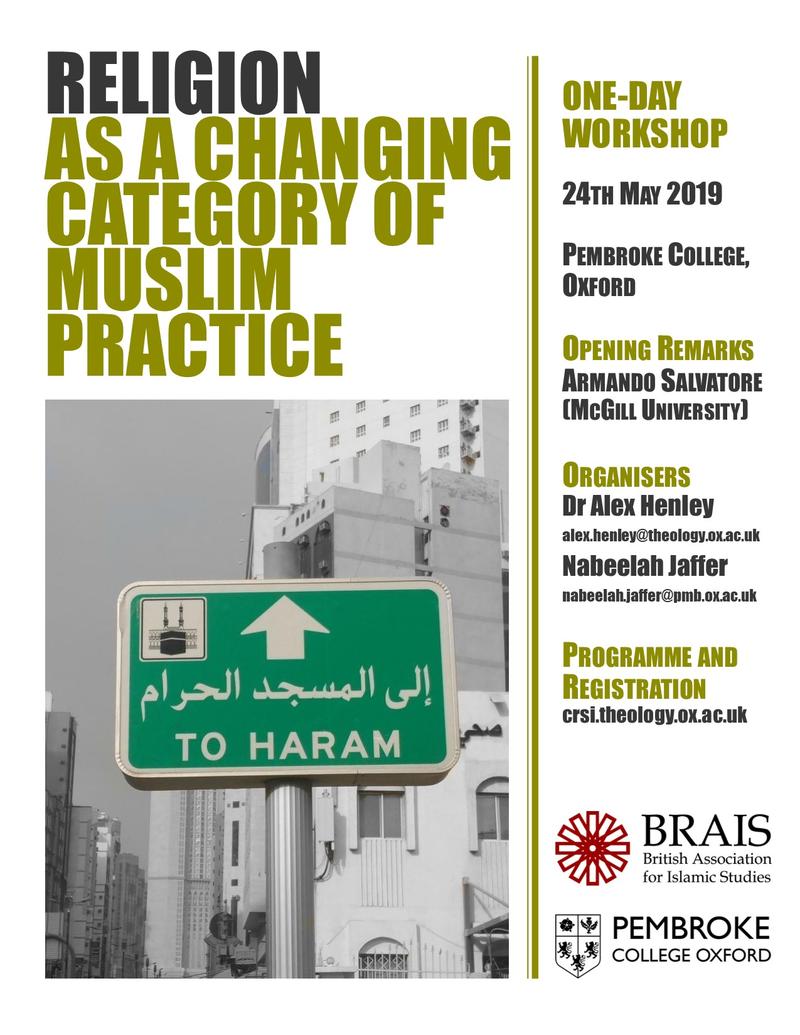 Click here for a printable version of the programme.

Unraveling the conundrum of religion in the study of Islam: Between Theology, Religious Studies and Social Theory.

A few thoughts on the relation between dīn and milla: Implications on the modern ‘religious’ and ‘secular’ imagination.

The secular-religious dichotomy in Islam: Avicenna and al-Razi’s counterpoint and the paradox of Theology (kalām).

Mapping out late Ottoman terms for religion and irreligion.

Islamism’s dīn: Boundaries of ‘religion’ in Mawdudi and his successors.

Religion as a category of institutional practice in Middle Eastern states.

Entertainment projects as markers of religious reform: The shift in scope and sphere of religion in Saudi Arabia.

Charity as ritual: Religion, identity, and the unsettling of secular humanitarianism in Shi‘a Islam.